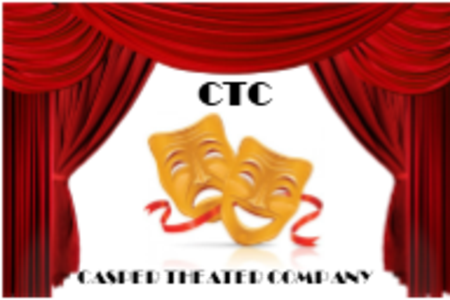 It was a beautiful late summer evening of 2014. Things were quiet in the city of Casper. Several people saw a need in the community of what used to be and wasn’t anymore and decided to bring it back for more choices. Casper Theater Company is pleased to announce the creation of a new semi-professional non-profit theater company in Casper

So, the several people put their heads together and decided to form a new theater company. Many names were discussed. We decided on Casper Theater Company or CTC as we like to call it. It was short and to the point, and said exactly who we are and what we do.
We  headed into the new adventure. We met, had a discussion about goals, wrote the By-laws, and then added an Operations Manual for job descriptions of board, and executive director, historian, and a PR person. We talked about a logo next. We had a lot of ideas and decided the faces, a curtain and our name.

Next we met with, what we call the “membership”: people who would like to be involved with our theater company. We talked about our ideas, goals and how we would start up the new adventure. We found  a dynamic FREE rehearsal space, and we took on our first play, which found us, sorta.

Our theater company is open to all who would like to be a part of us. We need board members, actors, directors, and tech people, but most of all we need audience members, because why would we do this without you?